15 The LORD your God will raise up a prophet like me from your community, from your fellow Israelites. He’s the one you must listen to. 16 That’s exactly what you requested from the LORD your God at Horeb, on the day of the assembly, when you said, “I can’t listen to the LORD my God’s voice anymore or look at this great fire any longer. I don’t want to die!” 17 The LORD said to me: What they’ve said is right. 18 I’ll raise up a prophet for them from among their fellow Israelites–one just like you. I’ll put my words in his mouth, and he will tell them everything I command him. 19 I myself will holda ccountable anyone who doesn’t listen to my words, which that prophet will speak in my name. 20 However, any prophet who arrogantly speaks a word in my name that I haven’t commanded him to speak, or who speaks in the name of other gods– that prophet must die. (CEB)

Our text today occurs in a section of Deuteronomy called the Torah of Moses where Moses authorizes a series of leadership roles: judges, king, priests, and prophets. These leadership roles are to guide Israel so that the people may maintain their peculiar identity and vocation as the people of God.

This is a continuation of Moses’ speaking to the people, telling them of God’s commandments, statutes, ordinances, and promises that the Lord himself had spoken to Moses on the mountain. In order to help the people remain faithful to the Lord, God promises to raise up for them a prophet like Moses who will speak the word and will of God to them.

This promise was to fulfill what the people of Israel had asked of God on the day of the assembly, when the people had gathered around the holy mountain to hear the voice of God speak to them the Ten Commandments. When they heard God’s voice, the people were afraid, and they believed that if they heard God’s voice again they would die. The voice of the Lord was too great, too powerful, for them to hear with their own ears. The sight of God’s glory in the fire, the cloud, and the thick darkness was more than the people could endure. So, the elders of the people went to Moses and asked him to intercede on their behalf: they wanted him to go and hear the words of the Lord and then tell them what God had said them. If Moses would do this for them, the elders promised that the people would listen to Moses and do what he relayed to them as God’s word. (c.f. Deuteronomy 5:22-33).

It almost sounds like that trope in a movie where a group of people comes to a really scary part of the haunted woods, and they nudge the little guy and say, “You go first. If you die, we know it’s not safe.” And the little guy’s like, shrug “All right,” and marches right in.

God thought the people’s request was a good idea. God said to Moses, “What they’ve said is right. I’ll raise up a prophet for them from among their fellow Israelites– one just like you. I’ll put my words in his mouth, and he will tell them everything I command him” (Deut. 18:17b-18 CEB).

God expected the people to listen to the words of the prophet and heed the prophet’s words as the words of God. Anyone who disobeyed the word of the prophet who spoke in the name of the Lord was guilty of disobeying the Lord, and God would hold that person accountable. And any prophet who spoke in the name of another god, or who put himself in the place of God by presuming to speak a word that the Lord had not commanded the prophet to speak, that prophet would pay the penalty of such arrogance with his life.

That’s why none of the prophets ever wanted the job when they were called to the role of prophet.

Throughout the history of Israel, God raised up prophets to speak God’s word and will to the people. Occasionally the prophets made predictions concerning the future but, by and large, prophets spoke out against the evils of immorality, idolatry, unfaithfulness, disobedience, unfair economics, injustice, exploitation of the poor, and bad politics. The prophets didn’t predict the future so much as offer if-then statements. If you keep doing this bad thing, then this is how things are going to go down. But if you turn away from that bad thing and do this good thing, then this is how things will go well for you. The prophets were less about predicting the future, and more about laying out the consequences of evil human activity for everyone to see and understand.

God was faithful in sending prophets to the people but, wouldn’t you know, the prophets were often met with resistance. It was dangerous to be a prophet in Israel. Prophets usually had very short lives because people didn’t often like what they had to say, especially those who were part of the establishment in those other three vocations: the judges, the kings, and the priests.

In a society like ours where we like true authority to rest with our own personal autonomy, it can seem odd to us that God called and authorized—and still calls and authorizes—certain persons for certain purposes. This holy authority runs against our modern cultural assumptions. People in our culture want to think that we are the authority. We like to believe that we’re in charge, that our way’s the right way.

The Israelites weren’t all that different. When a prophet spoke out against something they were doing, they often reacted like any one of us would: as though they were offended that some Bozo-the-prophet was trying to set them straight. Those in positions of power and authority had an especially difficult time accepting the words of prophets because prophets challenged their authority.

Sometimes people listened, but often enough they simply killed the prophet so that the word that the Lord wanted them to hear was extinguished. Yet, what they should have done was take some time to breathe, ponder on the prophet’s words, do a little self-examination, and honestly consider their own actions.

But no one likes it when someone points out our faults or tells us we’ve done something (or are doing something) contrary to the will of God. And, let’s be honest, every scandal that hits the clergy or leaders of any Christian church denomination erodes the authority of clergy and church leaders everywhere. Those scandals, and other matters, can cause us to wonder why God would give an assurance of holy authority to fallible human beings.

Yet, the holy authority of the prophets was one that counterbalanced the hereditary authority of the priests and kings, which could become inflexible, detached, and unresponsive to the actual needs of the people. It also served to counterbalance those times when the people, themselves, grew apathetic and got too comfortable with not caring for others. Because the office of the prophets wasn’t based on hereditary succession, it was an authority that could pop up in any person in any tribe at any time.

In the fullness of time, God did something different. Instead of sending another prophet to speak the word of God, God sent his Word, his only Son, our Lord Jesus Christ, to speak to us directly. This time, God’s people would hear the word of God from God himself! God himself came into our world. Taking on flesh and becoming one of us, he lived with us as an example for every eye to see. He spoke the words of the Father in a unique way, because he himself is the Word of God incarnate. He taught with authority as no other prophet or scribe or Pharisee had done before because he himself was and is the authority. God raised up a prophet like Moses, and yet a greater prophet than Moses.

Jesus is the Light of the world, which enlightens every person. Those who are illumined by the light of Jesus walk according to the ways of God. They live in the light and are strengthened against the works of evil. They stay on the path of righteousness. They do justice, love mercy, and walk humbly with the God who calls us out of darkness.

Jesus and his disciples went to the city of Capernaum in Galilee and entered the synagogue on the Sabbath day and taught. Mark tells us that the people were astounded at his teaching because he taught them as one having authority—like Moses himself. When a man with an unclean spirit entered the synagogue, the demon recognized Jesus’ true identity as the Holy One of God. Jesus rebuked the unclean spirit and cast it out of the man. The people in the synagogue were already impressed with Jesus’ teaching, but this casting out the demon episode was like making a half-court shot when the game was already won. It was icing on the cake. The people said, “What’s this? A new teaching with authority! He even commands unclean spirits and they obey him!” (Mark 1:27 CEB).

Still, many people didn’t like what Jesus taught, and like so many prophets before him, he was killed for speaking the word of God to the people. But as I said before, with Jesus, God has done something different. On the third day, Jesus was raised from the dead. Forty days later he ascended into heaven. And in the fullness of time our Lord will return to establish his kingdom forever.

God has raised up for us a prophet like Moses. Yet, Jesus of Nazareth is more than a prophet. He’s our advocate in the judgment, our high priest, our king, and he’s God’s Son. He has authority over all things: over unclean spirits, forgiveness of sins, setting certain people apart for certain tasks in life, and he has authority over us.

Jesus spoke out against the evils of immorality, idolatry, unfaithfulness, disobedience, unfair economics, injustice, and exploitation of the poor and marginalized. He called people to repent and turn instead to a righteous life of faithfulness, obedience, love, justice, and mercy. Before anyone realized he was the Messiah, people were amazed that he taught with authority.

While Moses liberated the people of Israel from slavery in Egypt, Jesus liberated the whole world from the power of sin and death. Jesus redeemed us on the cross and offered salvation to everyone. The world has been a mess since the moment Adam and Eve disobeyed God. The human race, even all of creation, needed a savior. God sent Jesus to make a way for us, to allow reconciliation with God to happen, because we needed it. We needed to hear that love casts out fear, that loving each other is how we love God and is the right way to live, that seeking justice for the oppressed and the poor is how we serve God, and that right living is more important than proper ritual.

In Jesus Christ, God has raised up for us a prophet like Moses to teach us how to live now and how to have life after we die. It’s up to us to heed the words of the prophet, to change our minds, hearts, and purpose, and to live in a way that points others to the kingdom of God.

In the name of the Father and of the Son and of the Holy Spirit, Amen! 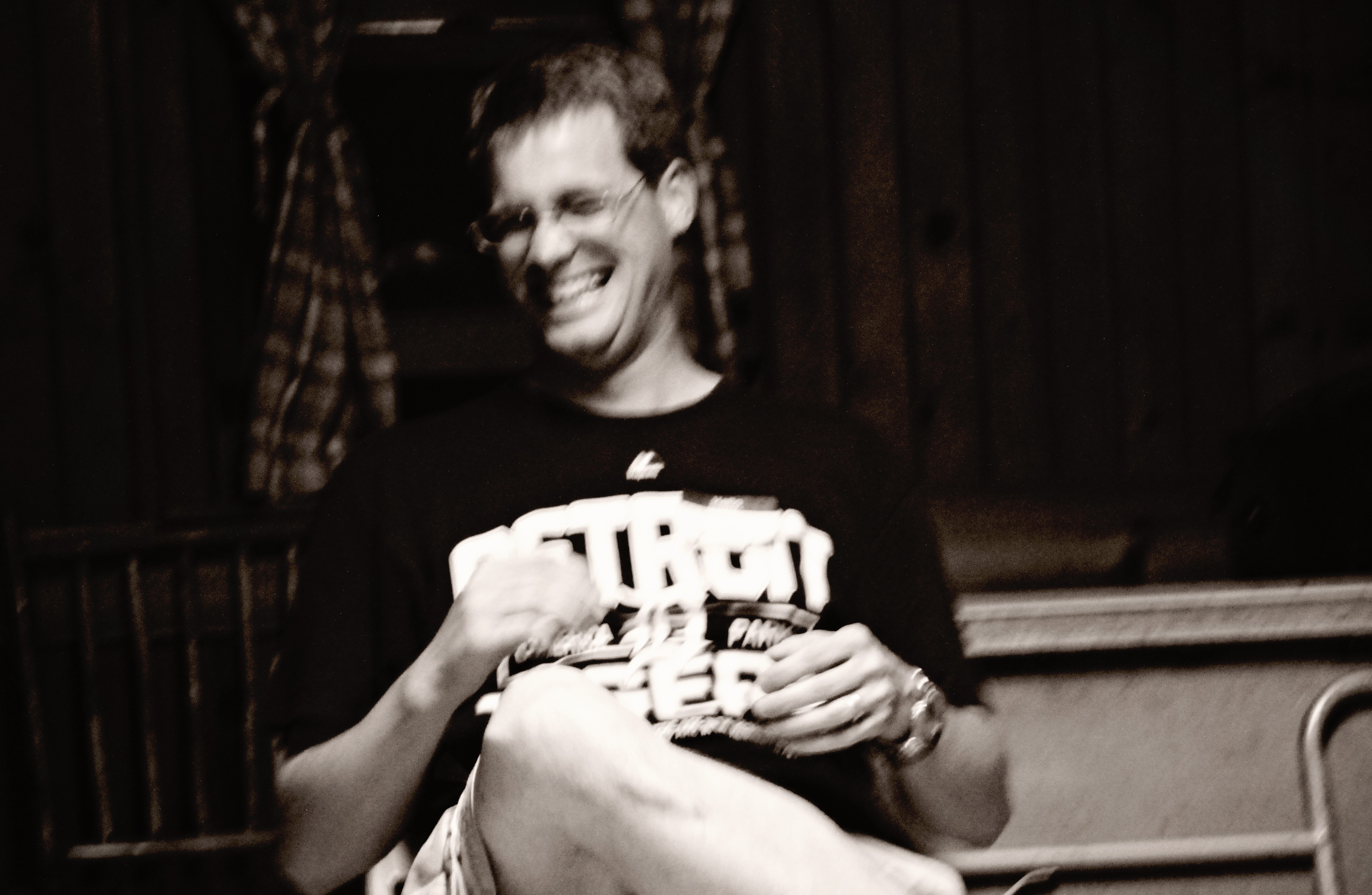